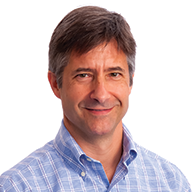 Revell Horsey is senior vice president and managing director of MEGA International, a global software firm that helps companies manage enterprise complexity by giving them an interactive view of their operations. He manages all of MEGA’s operations in the US and Canada, including strategy and business development, sales, marketing, customer support and consulting.

Prior to assuming his current role at MEGA, Mr. Horsey was acting CFO and director of Aquicore, a Washington, DC–based IoT startup that combines web-enabled metering technology with an SaaS data analytics platform to provide real-time commercial energy management intelligence to owners and operators of commercial real estate.

Previously, Mr. Horsey was the founding president and CFO of HelloWallet, an SaaS provider of personalized financial guidance whose mission is to democratize access to financial management and guidance for all Americans. The company was acquired by Morningstar in June 2014.

Mr. Horsey has nearly 30 years working with founders and their management teams to build sustainable high-growth companies. As a corporate finance specialist on Wall Street, Mr. Horsey was directly responsible for more than $40 billion of equity capital financing by companies across a broad range of industries. His involvement with many of these companies began when they were private and looking for advice on valuation and positioning for their introduction to the public markets. Mr. Horsey combined his capital markets expertise with experience as a senior sell-side equity research analyst, where he was responsible for developing and communicating investment themes for emerging growth companies in the hospitality industry.

During his investment banking career, Mr. Horsey led the equity Capital Markets division at Montgomery Securities and Bank of America Securities during the internet boom of the late 1990s. He subsequently was appointed Global Head of Technology Corporate and Investment Banking at Bank of America, where he led a team of 150 professionals responsible for the firm’s investment banking and credit relationships in the technology sector.

Since leaving Wall Street, Mr. Horsey has shifted his focus from being a service provider to corporate executives to teaming up with founders to build innovative companies that provide disruptive solutions to conventional challenges. In most cases, a common theme that characterizes the companies where he spends his time is the joint pursuit of social purpose and profit.