Accidental drowning remains one of the leading causes of death among children. Wave Drowning Detection Systems, a Westport startup, has developed a technology to eradicate this problem. The company took home a first-place award at the most recent EIA Awards competition in April. Dave Cutler, Mark Caron (in photo) and Elena Helgiu talked to us about the uniqueness of their product, the motivating nature of their work and the experience of participating in the EIA Awards. 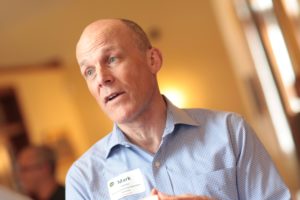 At Wave, we are working to solve the problem of drowning detection. The idea was triggered by a drowning in a town where Dave was living about twelve years ago. We’ve developed a system that is affordable and simple to deploy across any number of aquatic facilities. As any lifesaving technology needs to be, it is also extremely reliable. We have plans to launch commercially this summer with a focus on public pools, schools and universities, health clubs, hotels, lakefront beaches, etc. – any confined area of swimming. There are about 300,000 commercial aquatic facilities in the US and more internationally, so it’s a huge market opportunity. We’re looking at moving into residential pools next year.

You’ve been demoing the product and conducting beta trials – what kind of reaction or feedback have you received?

We’re encouraged by the enthusiastic reception from the industry, even though we really haven’t launched the product yet or kicked off any formal sales and marketing activities. We’ve had lots of incoming requests for information, demos and pricing proposals from around the US and the world. We’ve tested it in around 30 pools across the country, many of which are in Connecticut. We’re doing beta trials, leaving the system in place for a number of days. We’re also lining up demo centers where aquatic directors can see the product in action. This first summer is really about getting the exposure, getting people comfortable with the technology, and we’ll be ramping up from there.

Once you launch, how do you plan to market the product?

In the long run, we intend to make it available online. We’ve put a ton of effort into making the product simple to purchase, understand and deploy. Some of our competitors require you to put cameras inside the pool, rip up the pool deck, get building permits and so on. We’re striving to remove the costs of professional salespeople making site visits. We think word of mouth will be very helpful in raising awareness of the product. The aquatic community is very tight-knit. They are appreciative of what we’re doing, and we’re confident they will help us get the word out.

What prompted you to pursue an EIA Award?

We’ve been aware of CTNext and its programs as a result of being involved in the Connecticut entrepreneurial community and having received funds from the Connecticut Innovations pre-seed matching fund program in November. We’ve also been part of the CTNext mentoring program for the past several months. We’ve been trying to take advantage of everything that CTNext has to offer, which is one of the reasons we decided to pursue the EIA Awards.

What were your impressions of the EIA process and event?

We’ve been involved in other pitch contests and found the EIAs to be well organized and clear as to what was required. The mentoring was very useful – we talked to people as we prepared our pitch who gave us valuable advice. It was also great to see the diversity of the other companies at the event, as there was a good mix of industries and companies doing cool things to solve problems to make the world a better place.

How will you apply funds?

We intend to use the EIA funds to increase our presence in Connecticut. We’ve done a lot of testing here and have plans for three new beta trials. The funds will enable us to double our efforts and blanket the state so no pool director will be too far away from a trial or demo. We want to make Connecticut the safest state for swimming.

What motivates the Wave Systems team on a daily basis?

Most people don’t realize how serious drowning is until it happens to someone they know. It’s the leading cause of accidental death in children under four years old and teens. Drowning is the only leading cause of accidental death that hasn’t been declining in recent years. Deaths from cars and bikes and other activities have been reduced by technology, but drowning rates have stayed the same. It’s very motivating for us to keep that in mind.

The following, compiled by the SBA/CT and the University of Connecticut, lists c[...]
+