Sam Gordon, a Stamford resident, has recently taken the reins of Innovate Stamford as Program Manager, implementing Stamford’s Innovation Places plans and vision. We spoke with Sam about his hopes and aspirations for the city he has come to embrace:

You recently joined the Innovate Stamford team. What attracted you to this opportunity?
I am going into my third year as a resident of Stamford, and I’ve really fallen in love with the city. Thecommunity, culture and diversity that exist here are attractive on their own. I’ve become increasingly involved in the community through different organizations, and when I came across the work that was going on with Innovate Stamford, it really appealed to me. My background is in sustainability and community development, and my experience is in working with startups, primarily with a triple bottom-line focus. When I saw that there was this big movement around innovation and entrepreneurship in the community in which I’m living, I was excited for the chance to be a part of it. 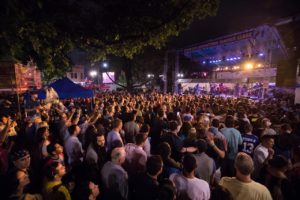 From an economic and community development perspective, where would you say Stamford is now, and where would you like to see it go?
Stamford is Connecticut’s third largest city, and it’s poised to become the second largest. Many people know Stamford for its plethora of corporate headquarters. There are four Fortune 500 companies and nine Fortune 1000 companies, but at the same time it is a really fun place to live, work and hang out. Between the existing ecosystem of corporations and small businesses, and the people who are passionate, engaged and excited about where they live, I think Stamford is poised to continue down a growing path.

What are some of the projects you’re most excited about?
We’re kicking off meetings relating to Gig Wi-Fi in the downtown area. I’m very excited about the Wayfinding RFP we released in December, which will better connect the city and help people get around one of the busiest train stations in the country. I’m also excited about the TEDx talks that are being planned right now for the spring, to be held in the Ferguson Library. Innovate Stamford will be presenting a talk. With the TEDx name recognition, it’s going to draw a lot of people from both Stamford and surrounding communities.

Having now lived in Stamford for a number of years, why do think Stamford was selected by the CTNext Board of Directors to become an Innovation Place?
If you live in Stamford or even visit, you will feel something special and unique here. There is a vibe when you walk around Stamford, whether you ride the complementary trolley, pop into someplace on Bedford Street for a drink or attend any number of events at places like Mill River Park, you get a sense that people want to be here. Despite the growing population, you run into one another all the time, and these accidental collisions open opportunity for spark and collaboration that can result in new ideas. A lot of our projects are designed around building momentum from that spark and creating new opportunities through co-learning, co-working and incubator/accelerator spaces.

If we were to fast forward five years from now, how will you define success?
We’re looking at several different metrics to gauge the success of this program. We can look at population growth and demographics; new and existing companies that are growing and adding jobs. Stamford, with a history of popular events like Alive at Five, can also measure growth in attendance and feedback about certain enhancements. Success will also be about understanding and leveraging why companies are choosing Stamford, and what role our commitment to innovation and entrepreneurial capacity plays in that decision. I want to share these stories five years from now and surprise people: “Stamford did what?!”

Now’s the time to start your application for Connecticut’s longest-running p[...]
+

The next Entrepreneur Innovation Awards (EIA) will be on Thursday, October 3, 2019 at The Bijou Theatre in Bridgeport.
+