These are exciting times for the brand-new Hartford InsurTech Hub. Earlier this month, the team wrapped up its hugely successful Selection Week by identifying the 11 companies that will be part of the Accelerator program that will strive to not only deepen Hartford’s role as the insurance capital of the world, for which it is already known, but to establish the city as a leading InsurTech center for technology startups in insurance and related fields.

Launched earlier this fall, the Hartford InsurTech Hub is one of the first programs to be supported by funds from CTNext’s Innovation Places program. With assistance from the Hartford-East Hartford Innovation Place team and support from Hartford Mayor Luke Bronin’s office, the InsurTech Hub is working with some of the most prominent insurance companies in the city along with Startupbootcamp, a company that designs and executes similar accelerator programs around the world.

Interest from companies vying to be part of the inaugural InsurTech Accelerator was fierce, to say the least. Initially, the team received applications from more than 1,000 globally located startups, of which 23 companies were shortlisted. The finalist companies made their case for inclusion to the corporate partners, investors and mentors during three marathon days of presentations at Upward Hartford. 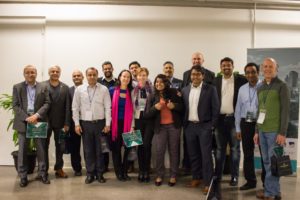 The companies selected to participate in the first cohort hail from all over the world, from across the United States to Australia to India. They run the gamut in terms of technology focus, from artificial intelligence to IoT to analytics to Smart Home. These companies will now move to Hartford for a three-month period beginning in January, during which they will receive support, mentoring, resources and investor connections with the goal of establishing deeper roots in Hartford, finding commercial success for themselves and helping to cement the city as the InsurTech capital.

It’s early days for the Accelerator, but so far, the optimism is real as the program is proving to be a fantastic case study demonstrating how partnership and collaboration between state government entities and private enterprise can begin to move the needle in Connecticut.