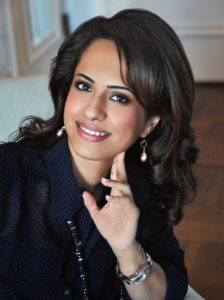 At the most recent EIA Awards, Reem Alattas took him a $10,000 grand prize for Rumble Helmet, her innovative bicycle helmet that is designed to significantly enhance safety for cyclists. The University of Bridgeport student spoke with CTNext about the impact the award win has had on her personal profile and the business overall as she eyes a 2018 market entry.

Tell us about the Rumble Helmet.

Rumble Helmet is a smart bicycle helmet with an integrated adaptive light system. The light system consists of a front flashlight, backlight, turn signals and uniquely designed side lights to indicate to other road users whether the cyclist is going straight ahead or turning right or left. The light system is activated using hand signals or buttons that can be placed on the handlebar. This product has been awarded two patents.

How did you conceive this idea?

At first, we were developing an app for cyclists using Google Glass. The main goal was to give the cyclist directions or navigational directions on the Glass so they could focus on the road and wouldn’t need to look down to see directions. My professor and I then added a helmet and lights, in addition to the Google Glass app. When I started the process of filing a patent, our lawyer convinced me to get rid of the Glass and just keep the helmet, which is what we did. 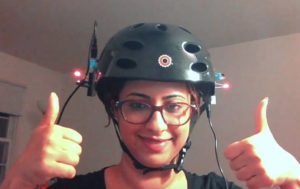 Where are you now in terms of product development, bringing it to market?

We’re working with a company in China to manufacture the prototype. We keep tweaking and changing the design, we’re adding a ventilation system, making it bigger, etc. Just recently we finalized the design, and we’re hoping the prototypes will be ready shortly, with the goal of bringing Rumble Helmet to market in 2018.

You were an EIA Award winner earlier this year. What led you to the EIA Awards?

My professors in the Student Entrepreneurship Center at University of Bridgeport told me about the competition and strongly suggested that I apply. I was definitely nervous about it, but I filled out the application. Shortly afterwards, CTNext told me I was nominated and assigned me a mentor, who gave me some great ideas. I pitched and made it!

What were your general impressions of the EIA Awards process?

It was great and super easy. You go online and create an account, and then you can access the application. I literally received a response the day after submitting my application. The people at CTNext are very friendly and they care about you. They want to do something for small businesses in the state of Connecticut. Everybody is willing to help at CTNext.

It’s only been a few months since you won, but aside from the cash, have there been any other benefits of winning?

Media coverage has been a big thing, whether here in the United States or in Saudi Arabia, where I am originally from. I was shocked when I saw my picture with the prototype I made under the king’s picture on the front page of one of the biggest Saudi newspapers. Twitter also is a big thing, especially in the Middle East, where Twitter is a very big deal. The CT Post also did a great job of featuring my story. And that was all because I won EIA. If I didn’t win this prize, nobody would put my picture anywhere. Without CTNext and the EIA Awards, none of that would have happened, to be honest with you.

Are you continuing your engagement with CTNext?

Definitely. I’m continuing to work with my CTNext mentor right now and definitely plan to participate in other CTNext programs at a future point when Rumble Helmet generates more traction in the marketplace.