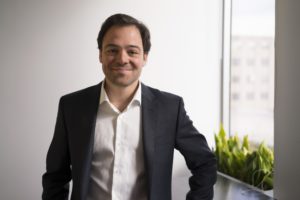 After taking a turn as moderator at the recently held Innovation Places Showcase in New Haven, Scott Andes, a former fellow with the Anne T. and Robert M. Bass Initiative on Innovation and Placemaking at Brookings Institute, spent a few minutes with CTNext sharing his thoughts on innovation strategies and ecosystems:

Tell us a little bit about yourself:

I am a former fellow in the office of Centennial Scholar at Brookings. My focus over the last decade has been on ‘innovation ecosystems’ and how to leverage new and existing technologies and creative industries to grow the economy. That’s my focal area, both from a research perspective and from on-the-ground work. I help cities think through their own innovation ecosystems and how to grow them.

What do you think are some of the key factors that determine whether place making and innovation district building is a success?

This might sound obvious, but the first thing is to be realistic. In a number of places that I visit, I find that the goals in what they want to accomplish are a little outlandish. They invest resources in something, build a co-working space and assume that they’re going to get the next Amazon. So, the first thing that determines success is identifying what you’re authentically good at, where your realistic opportunities exist and execute on those. The second piece is not to have a ‘build it and they will come’ assumption. A lot of times, I see place making used as a silver bullet, of sorts. People think that if they build a particular meeting space, their economy will thrive. It doesn’t work that way. You need involvement from all of the other nuts and bolts – programming, leadership, resources, partners, civic and private actors, private sectors actors, etc.

Coming off your participation in the Innovation Places showcase, what are your general thoughts and impressions of the program?

I think it’s an awesome idea. I really like the concept of building out regional ecosystems, focusing on strengths in different parts of the state. I really like the emphasis on industry clusters and focus on industry sector strength – identifying particular sectors that are strong, like undersea transportation in Thames River region.

I’m really interested in seeing how it progresses, given that we’re in the very early days. I think the trick will be, on the one hand, having each one of the communities fully take advantage of their special niches but also interact with one another, as Connecticut is not a big state. It seemed to me that there’s a lot of interaction, exchange and learning going on already and I think that will really be a key going forward.

What advice would you give to each of those executive directors who are all relatively new to their respective roles?

I would give them the same advice I give to people in these positions all around the country – get out there! And I don’t just mean in their communities. Pick up the phone and figure out what’s going well in Denver and Chicago and other smaller communities. It’s very easy to become parochial in these types of roles where you’re working so hard in a relatively small area. It’s easy to forget that there’s a big world out there and lots of other people trying to do the things you’re trying to do – and you can learn from them. In the economic development community and innovation district space, people are willing to open their doors. One of the major benefits of being in the Northeast is that everything is really close. Rhode Island and Vermont are doing some cool stuff, as is Massachusetts. Take advantage of the geography and spend a few days visiting these other states and really understand what they are doing.

Finally, how is success in innovation district building best measured?

Each one of these executive directors and the community should have outcome metrics, but there’s really no right answer. Of course, we can go to a high level and look at jobs created, exports and those sort of traditional economic indicators. And it’s true, those are important. But each one of these communities, and the program as a whole, should map out what success will look like in Connecticut. This is the first thing I do when I take on projects on the ground – I ask, “What do you want? What does a homerun look like?” If it’s not outlined at the outset, that’s a problem. Figuring that out in the near term is an essential part of the process.